Smoothie Recipes for Everyone

I can not drink green tea alone, since it tastes bad for me. Therefore, I prefer green tea flavored lemonade or blackberry smoothie. At first, I didn’t think it will good but, it is much more than expected. With this green tea blackberry smoothie, you are going to love green tea. Also, as a metabolism accelerator, green tea is the perfect choice. It also eases the digestion system of human body. You can burn fat and lose weight with that Green-tea Blackberry Smoothie Recipe.

How to Make Green-tea Blackberry Smoothie 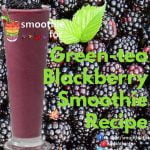 If you can find blackberry or white mulberry on the market( of course it should be in season) you could replace ice-cream with the real fruits. And if you want to good quality breakfast, green tea smoothie is so good with fruit muesli. It is very satisfying.

Green-tea Blackberry Smoothie Recipe enables your metabolism to work faster. As many people know, green tea is a metabolism enhancer and it helps the digestion system of the human body.

SmoothieBender
I'm a smoothie lover. I am a sportman and interest on nutrition. Therefore, making my own smoothie recipes for any situation.